Today Facebook announced that it has acquired nextstop, a service that allows users to browse and create their own local guides and recommendations. There is speculation that Facebook is only interested in acquiring the team (which hails from Google) and doesn’t care about the user-generated content that it has amassed. It is common knowledge that Facebook is preparing to launch location services to compete with Foursquare and Gowalla so many think this team would do well to bring that product to life. But with Google’s acquisition of ITA and Facebook’s heated landgrab with Google, I have to imagine that Facebook wants to play in the space as well.

To date, Facebook has been able to tick the travel box through development partners. TripAdvisor, for example, launched the “Cities I’ve Visited” application on Facebook in ’07. TripAdvisor also recently added more Facebook functionality to its site, integrating the Facebook “Like” button that shows how many friends have given a thumbs up to a specific destination or property and allowing users to see what friends have visited cities. In addition, you can post a message to your wall seeking advice and/or message them through Facebook. (See my previous blog post on this integration.)

The majority of us turn to friends for travel advice. Since so much of our daily interaction with friends now takes place on Facebook, it’s only natural to use Facebook as a vehicle for seeking and giving travel advice. As an experiment, a few days ago I updated my status message with the following question:

In less than a day I heard from 9 friends who had an opinion about hotels in Las Vegas. 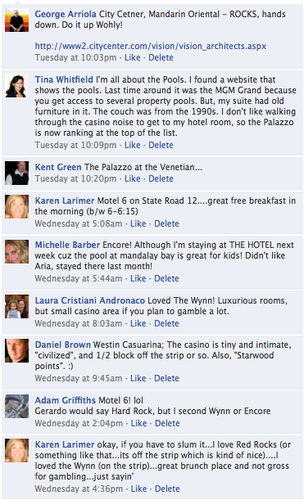 These recommendations are far shorter and less informal than the reviews you might find on TripAdvisor, for example, but because they come from trusted friends, I am much more likely to take them seriously. Social media has us trained to think in small bursts. We are limited to 140 characters on Twitter. We show preference by clicking a ‘like’ button. We ‘check-in’ to show where we are. Actions are quick and require little thought. Just think about the games that have been developed for the platform and have become successful – – not a lot of strategic thinking there.

If Facebook is, in fact, planning to enter the travel market, can we expect the anonymous reviews that are so important today to go away as trusted friends’ picks become easier to find? I’m on the fence on this one. Part of me thinks that Facebook is a large enough entity with such a strong foothold that we can all be retrained to share travel recommendations in new ways. (Ten years ago who thought that 99% of birthday wishes would come via the wall on a social network.) But the other part of me thinks that people like sharing information on vertical Web sites because it feels good to be an expert among experts and it is more fun to share with people that love the subject as much as you do. TravelPost and FlyerTalk are good examples of communities that will likely survive regardless of a Facebook play. The others? Time will tell…

Revinate's CEO Featured in "Voices in the Time of Crisis" Series

5 Tips for Hotels Facing a Lockdown